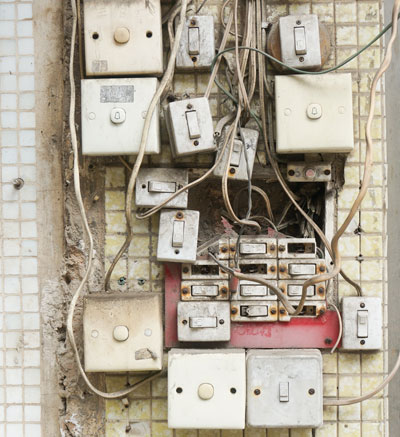 Circuit breakers that are tripping frequently
Having a circuit breaker that trips occasionally is actually quite reassuring: it’s protecting your home and appliances from surges in the national grid—e.g. from electrical storms or trees falling on power lines. All of the following also applies to fuses.

However, if your circuit breaker is tripping frequently, this indicates an issue with your wiring or appliances. If your circuit breaker trips upon you using a specific appliance then you can conclude that that device is using too high a wattage. Try using your appliance on a lower setting, or only using it when you are not using other appliances on that circuit. If you cannot identify a specific device, it is likely that your wiring can’t handle the power demands that you’re asking of it. You should consider a full or partial rewire.

There are two other causes for circuit breakers tripping often that should be mentioned here: short circuit faults and ground faults.

A short circuit occurs when a live wire and a neutral wire touch. When two such (uninsulated) wires contact one another a great amount of current will flow, thus tripping the circuit breaker/ burning through the fuse. Short circuits often create sparks and can start fires. Common causes include loose connections in the fuse box, and having a mouse chew through your wiring.

Ground faults occur when a wire carrying current contacts a ground wire. Again, the circuit breaker will be tripped as a large amount of current is diverted through it. Water, being a conductor, can cause ground faults.

These are two types of ‘arc faults’ i.e. faults whereby current is veering off the intended path. Such faults are a leading cause of electrical fires—if you notice that a section of wall is often warm you should get a qualified electrician to investigate. You can mitigate against such faults by introducing Arc Fault Circuit Interrupters (AFCIs). Arc faults will start occurring if the wiring in a property has deteriorated significantly (which it will over time), if rodents have chewed through the insulation of wiring, or if you’ve had work done to your wiring by a poor contractor.

“I’ve Received Electrical Shocks”
Typically, if you receive an electrical shock, the problem will be lie with a device that doesn’t meet industry or government standards (e.g. a device cased in metal without a ground pin, or an extension cord that was selling at a ‘too-good-to-be-true price’). Loose outlets are also a common cause of shocks, if you have an outlet that is causing electrical shocks you must have it replaced.

Flickering Lights
Flickering lights are a symptom of a variety of faults. “The lights going off” is a common phrase synonymous with power outages; similarly, flickering lights indicate a variable current—as the current rises the bulb brightens, and as the current falls the light dims. Lights may flicker during a lightning storm; however, if your lighting is flickering on a normal day then you have endemic wiring faults or a ghost!

A mismatch in the brightness of two bulbs is typically due to the bulbs being of different wattages. If the bulbs are identical, the issue clearly lies with the wiring.
Dimmer switches that don’t function properly indicate a fault in the outlet—as aforementioned faulty outlets cause shocks, so be cautious.

Aluminium Wiring
During the middle of the 20th Century, aluminium was often used as a cheap alternative to copper. Unfortunately, aluminium rapidly corrodes when in contact with copper—leading to loose connections, and ultimately fires. If you discover that you have aluminium wiring, you ought to have it replaced.

From a safety point of view, if you have any electrical faults, call your Winchester electricians today.